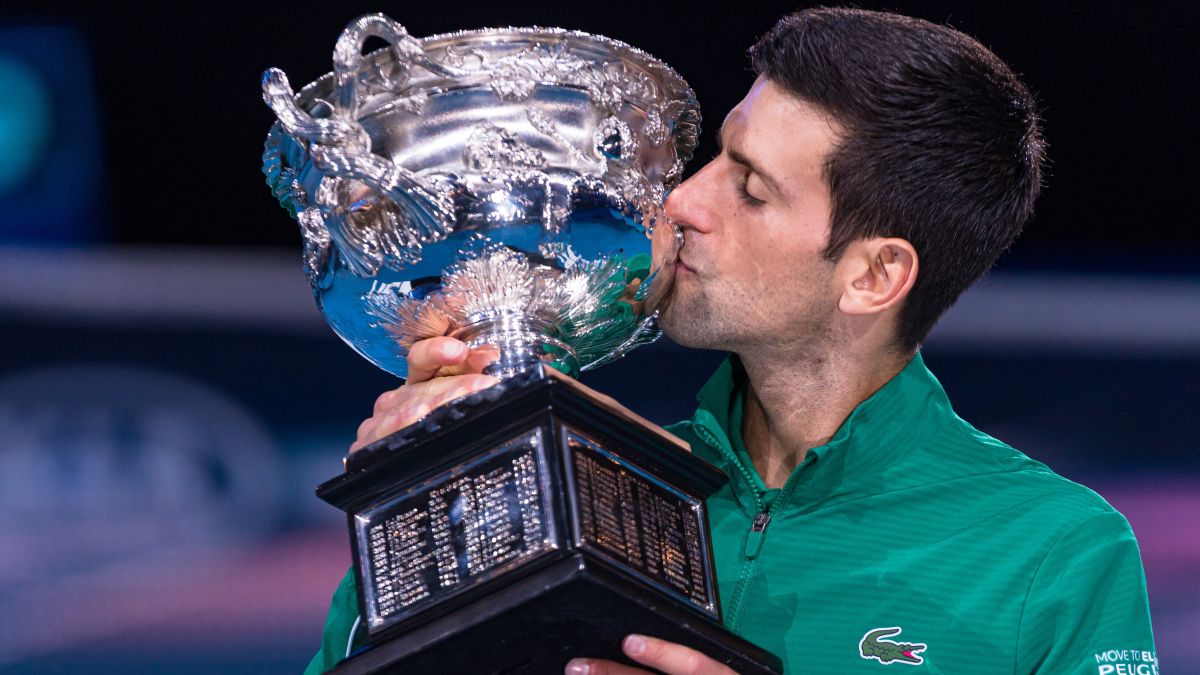 The world’s top tennis players, including defending champions Novak Djokovic and Sofia Kenin, are Down Under for the first major of the year – and it’s shaping up to be a tournament like no other. Find out how to watch tennis online and get a 2021 Australian Open live stream today with the help of our guide.

Due in part to Roger Federer’s continued absence through injury, 2020 made stars of a new generation of talent, the brightest being US Open winner and Australian Open runner-up Dominic Thiem, as well as Daniil Medvedev, Stefanos Tsitsipas and the controversial Alexander Zverev.

All are now pushing old kings like Djokovic – still the favourite at Melbourne Park – and Rafael Nadal like never before, and this year’s Men’s Singles could finally see a winner outside of the Big Three since Stan Wawrinka back in 2014.

Just as competitive if not more so, the 2021 Australian Open Women’s Singles field can’t be said to have a front runner necessarily, with WTA World No. 1 and home favourite Ashleigh Barty finally looking to win her native Grand Slam.  To do so, she’ll need to conquer the likes of Simona Halep, Naomi Osaka and Aryna Sabalenka, as well as better rising stars like Coco Gauff and Iga Swiatek – plus the legendary Serena Williams, still chasing her record-equalling 24th Grand Slam singles title.

The culmination of a shedload of early 2021 season tennis being played Down Under, Aussie Open boss Craig Tilley has insisted the tournament will go ahead despite another positive recent Covid test, in which case it should be a brilliant fortnight of action for tennis fans. Read on as we explain how to watch an Australian Open live stream wherever you are right now.

Once again, Aussie tennis fans can watch all of the Australian Open action without paying a penny thanks to Channel 9, which is completely FREE to watch.

Better still, every match on every court will be available to stream – for FREE on the 9Now streaming service. All you need to do to stream the tennis is register with your email address and provide your local, Australian ZIP code (such as 3000 for Melbourne)

Play starts at 11am AEDT each morning, while the evening sessions begin at 7pm.

If you’re currently out of the country but want to catch that free Australian Open coverage on Channel 9, you’ll need to get yourself a VPN. Here’s how that works.

For broadcast and streaming details in tennis-mad countries like the UK, Australia, US, Canada and New Zealand, just scroll down the page – everything you need to know is there, including details of who is showing the tennis.

But if you try to watch your domestic coverage from somewhere outside your home country, you’ll soon find a problem – geo-blocking. That’s where the broadcaster prevents you from watching your usual feed from abroad. It’s a common problem for sports fans all over the world. Fortunately, there’s an easy solution.

How to watch Australian Open: live stream 2021 tennis online in the US today

In the US, Australian Open coverage comes courtesy of ESPN  and the Tennis Channel, which also has rights to the tournament but will only be showing it on linear TV.

Both of these are cable-based services, though, so in order to watch the Australian Open online you’ll need to be a paying customer. Or have a good over-the-top streaming service that gives you access to the same channels for a fraction of the price!

Of the many and varied options, the best for tennis fans wanting to watch an Australian Open live stream is Sling TV, whose Sling Orange package features ESPN channels for just $35 a month – check out a FREE Sling TV trial or save $10 on your first month, the choice is yours.

Throw in its Sports Extra add-on for an extra $15 a month to get the Tennis Channel and more – and you’re done for just $50 a month. That’s much less than the competition and WAY less than cable!

Alternatively, fuboTV is an even more complete end-to-end cable replacement services, which offers both ESPN and the Tennis Channel as well on plans starting from $64.99 a month for over 120 channels.

New or existing subscribers to US streaming services can still access the platform of their choice from abroad, too – all you need is the help of a good VPN.

In Canada, you can watch the Australian Open on English-language TSN or French-language RDS – but they’re premium channels that typically come with a pay TV package.

If you get them as part of your cable deal, then you’ll just be able to log in with the details of your provider and get access to an Aussie Open live stream.

If you don’t have cable, then you can subscribe to TSN or RDS on a streaming-only basis from just CA$4.99 a day or (much better value) $19.99 a month.

Play gets started at 7pm ET/4pm PT each day, but you’ll have to be up well into the early hours to catch the evening sessions, which start at 3am ET/12am PT.

If you decide to subscribe or already have, remember you can take your favorite sports streaming service with you wherever you go – just try our No. 1 overall rated VPN 100% risk-free for 30-days and follow the instructions above.

How to live stream Australian Open 2021 tennis in the UK

Tennis fans based in the UK can watch the Australian Open action via Eurosport, which means you need to have a subscription to tune in.

Eurosport is available with basic Sky TV packages or via a Eurosport Player pass, which costs either £9.99 per month or £39.99 if you’re ready to commit to a whole year.

You’ll have to be up late to tune into the day sessions, which begin at midnight UK time, though the evening sessions get underway at the much friendlier time of 8am GMT.

Not in the UK this fortnight? Don’t panic, as downloading and installing a VPN as described above will let you tune in just as you would if you were back at home in Blighty.

Live Australian Open coverage in New Zealand comes courtesy of Sky Sport, which is available as part of a range of pay TV packages.

Subscribers can watch online using the country’s Sky Go service, while cord-cutters and anyone else can try the Sky Sport Now streaming-only platform – where a weekly pass costs just $19.99.

Play gets underway at 1pm NZDT each day, and the evening sessions begin at 9pm.

Anyone in New Zealand from abroad or vice-versa can use the VPN route outlined earlier to access their preferred coverage just like they would at home.

Tensions have been simmering away Down Under, with the build-up to this year’s Aussie Open punctuated by an added layer of intrigue to the Nadal vs Djokovic rivalry, after the Spanish world no. 2 took a rather dim view on the defending champ’s list of pre-tournament quarantine demands such as private houses with training courts and improved food.

Djokovic once again heads up the odds in the Men’s Singles ahead of big serving Daniil Medvedev, with Thiem and Nadal rounding out the top four favourites for the event.

In the always unpredictable and arguably even more enthralling Women’s Singles, oddsmakers have Naomi Osaka as the marginal frontrunner, but there’s little to choose between her, home favourite Ashleigh Barty, Aryna Sabalenka and the legendary Serena Williams.

Current dates for the 2021 Australian Open (subject to change).

Who has won the most Australian Opens?

How much do the winners get at the 2020 Australian Open?

There’s a prize pot of AUD $71.5 million in prize money up for grabs in Melbourne this year. The full breakdown hasn’t yet been revealed, but both the men’s and women’s winners pocketed a tidy AUD $4,120,000 in 2020.

What is the format of the Australian Open tennis?

The Australian Open is played at Melbourne Park in Melbourne, which is located in the Melbourne Sports and Entertainment Precinct; the event moved to this site in 1988.

Everything – the #1 best VPN

Balance of options and ease of use