Even During COVID, Esports Pros Make Bank with Games Like … Chess? 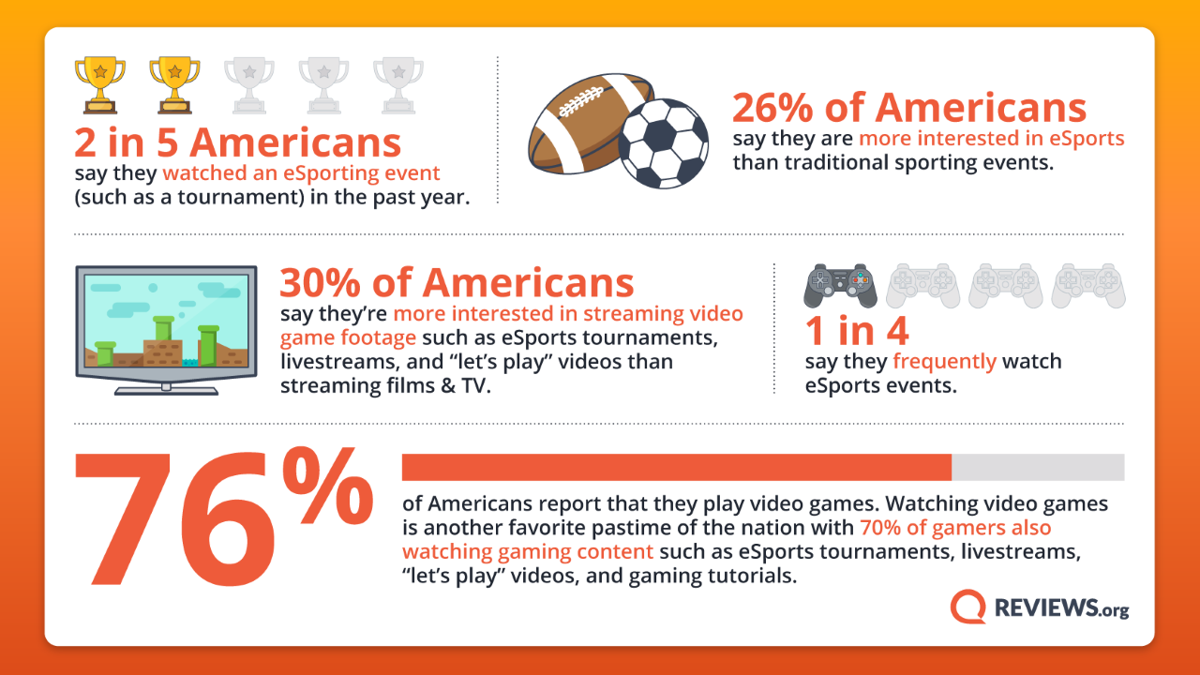 Sports! It’s a thing people really like. Or, at least, they used to. According to the 2021 esports Report from Reviews.org, more and more people—70% of us these days—prefer to watch people play video games. Compare that with the 76% who are players themselves.

All that viewing is not limited to professional players playing video games in tournaments (though 40% of the survey respondents have done so). In this report, eSports includes watching players on streaming services such as Twitch and YouTube and watching tutorials.

Why is this all so interesting, when you could simply sit in the living room watching your teenagers wage digital battle between handfuls of Doritos? Because of money. The pro esports athletes are pulling in riches that will start to make the pro athletes on the court or on the field question whether it’s worth risking concussions and worse, when they could settle for a repetitive stress injury using a game controller.

For example, the report shows that the count of US-based pro-esports players is well over 4,000—and they were all competing for payouts that equal about $20 million in 2020. The US leads the way, with China and Korea behind both in number of players and money paid out.

Bear in mind, though, that those numbers are down because of COVID-19. Prior to the pandemic, things were exploding. The increase from 2001 (with esports payouts at $900,000) to 2019 (payouts in excess of $225 million) was very steady, even excessive. But the pandemic dropped payouts by 56%, because the fans and players couldn’t travel and buy as much to support it all. 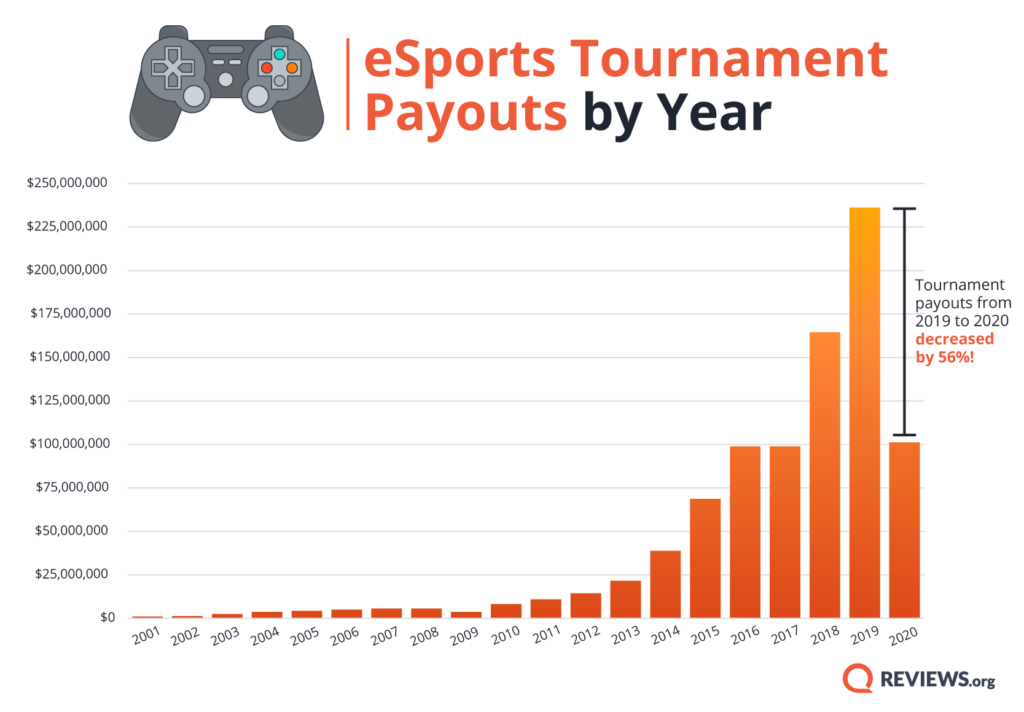 Also, as the report indicates, the play isn’t the same when the best of the best are at home on crappy connections. The latency issues when playing internationally are real, something you don’t see when esports pros gather at a conference.

If you’re curious how much of an impact that in-person, hair-trigger timing can matter for the pros, consider this: In the years prior to 2020, the top game making the top players the top money was always the Warcraft offshoot Dota 2, a free-to-play multiplayer battle arena. 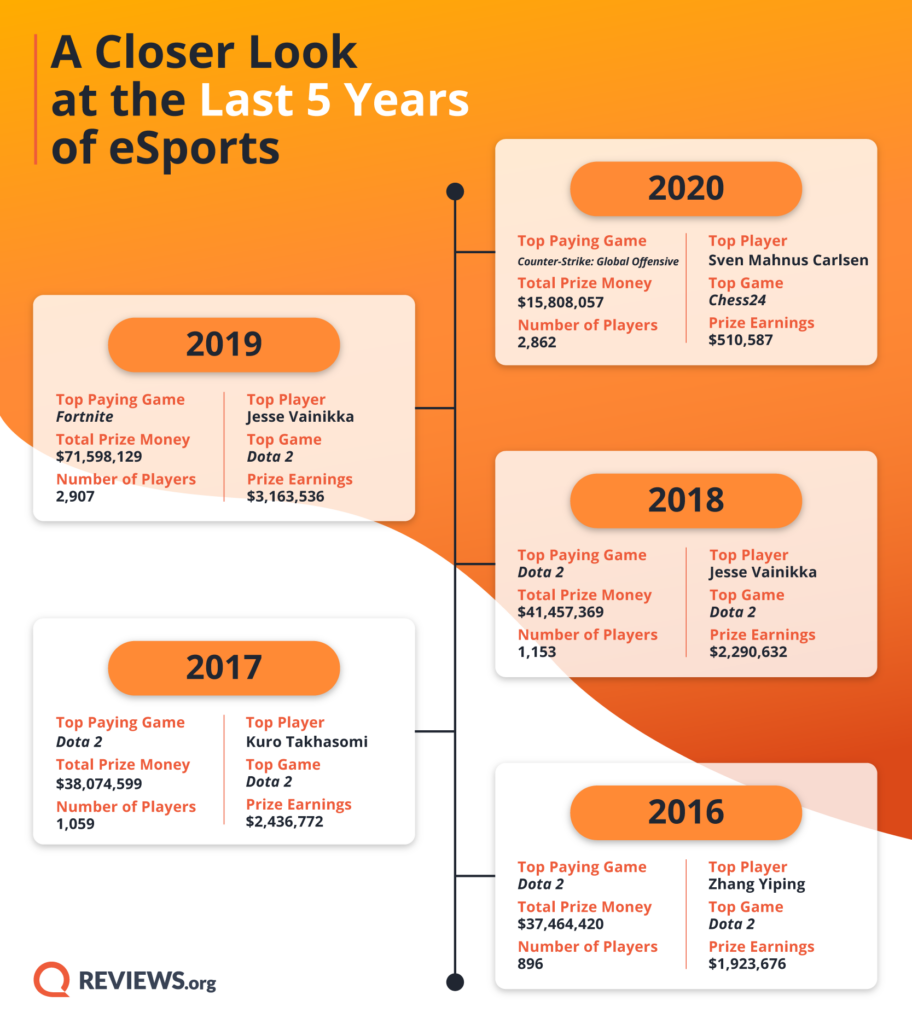 That’s in part because Sven Magnus Carlsen, the 31-year-old Norwegian chess prodigy turned grandmaster, was smart enough to organize the Magnus Carlsen Invitational via the Chess24.com site, which ran from April 18 to May 3 2020. And Carlsen cleaned house. This is like Michael Jordan throwing a one-on-one basketball tournament when he was still with the Bulls, and beating everyone who showed up.

Carlsen might have made even more, though, if he’d been able to go to all the live tournaments that were canceled last year. Also note that the money Carlsen made in 2020 is one-sixth of what the top Dota 2 player (Jesse “JerAx” Vainikka of Finland) made in 2019.

Curious About Your Internet Speed? Test It Right Now!

(Turn off your VPN and any streaming video for best results.)